Xu is interested in robotics, but when he grows up he is going to be a doctor

Xu is interested in robotics, but when he grows up he is going to be a doctor

Xu Liwei is thirteen years old and is in eighth grade of Koper Primary School.

He has a brother and a sister. Jiajun is eight years old and is in third grade, and Jiayi is a first-grader.

Xu misses his grandma, who lives in Lishui. Lishui is a town is near Yangtze River. China is a very big country. To let someone know where a town or a village is located, you need to tell them the nearest major city. Lishui is near Shanghai.

Xu’s grandma once visited him in Slovenia. While she was here, she made him spaghetti, which are among his favourite foods. “But those are rice spaghetti,” he explains. Chinese pastry, similar to Slovenian doughnuts, is also his favourite.

Xu visited his grandma, too. During that time, he played with friends in the yard and in the park next to grandma’s block of flats. They built sand castles. There is a river flowing nearby, and they liked throwing stones into it. Sometimes they even had a little picnic on the riverbank.

Xu still keeps in touch with his Chinese friends. He talks to them using the WeChat app.

In Slovenia, he likes to eat gibanica layered pastry or pancakes with Nutella. Believe it or not, you can also get Nutella in China.

What he likes most in Slovenia is that everything is clean here.

He also likes that school is not as difficult as in China. There, first-graders learn mathematics that Slovenian students learn in sixth grade.

Despite this, he spends most of his afternoons learning. When he spends time with his classmates, it is mostly at school. They talk, sometimes play football or tag. He used to practice judo, but now he is more interested in technology, especially robotics.

But when he grows up, he will not be a computer engineer, but a doctor. Since he was little, he knew that he wanted to help others. 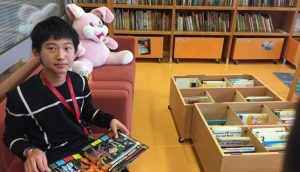 My name is Xu: Wo de ming zi shi Xu

The Chinese use special characters instead of letters. Every character means a different word.

With this You agree to accept cookies of other pages, from which content is shown on this page (You Tube, ...)