In Kongo, they loved football, and in Slovenia, they got to love basketball

In Kongo, they loved football, and in Slovenia, they got to love basketball

They came here a year and a half ago, and they already speak Slovenian fluently. One could call them true polyglots, because they also speak French and Lingala, one of the many languages spoken in the Congo. 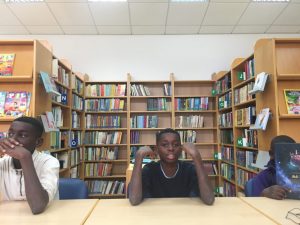 Dad said that by the time we grow up, we will speak five or six languages,” says Bonheur, who is nine years old and is the most talkative among his brothers; at least when it comes to serious newspaper interviews like the one for Časoris.

The Congo is a huge country in the middle of Africa. Even though it has abundant natural wealth, many people are very poor. Some children are even forced to work in cobalt mines instead of going to school. Cobalt is used in manufacturing smartphones. Amnesty International has already

smart phone producers to check if the cobalt used in their batteries was mined by children.

Dan, Bonheur and Rilain lived in Kinshasa. This is Congo’s capital with a population of eleven million. In their Congolese school, the teachers were not as nice as in Slovenia. Despite this, they liked it in the Congo, because they had many friends there. They played tag and hide-and-seek with them.

But they made new friends in Slovenia. In the mornings, they go to classes together, in the afternoons, they do their homework and play, and in the evenings, they play basketball. They like their France Bevk Primary School in Ljubljana because their classmates and teachers have welcomed them with open arms.

In Slovenia, many things are similar to the Congo. Children like to eat macaroni, drink juice and water. Their mother, who is a hairdresser, used to make them fish, egg and meat dishes. And as mothers all around the world do, she used to read them bedtime stories. Children from Kinshasa know the one about the Little Red Riding Hood, too. 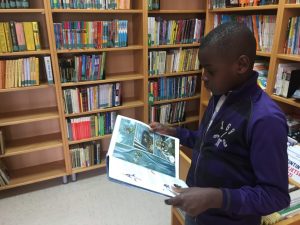 The brothers continue to like reading in Slovenia as well. This helps them learn Slovenian. It is very important for them to speak correctly. If one of them makes a mistake, the others correct him right away.

Same as all young basketball players and many Slovenians in general, the Matondo Kimpala brothers watched the European Basketball Championship. They rooted for Dončić, but also for Dragić and the rest of the team. “When you become a basketball player, you will have to speak on television”, said Bonheur, probably remembering television statements by Dončić and Dragić, to Rilain, the quiet one of the three.

In the Congo, football is the most popular sport. Bonheur used to practice it, too, but he took up basketball in Slovenia. When they grow up, all three of them will be basketball players. They already practice at Ježica basketball association. Dan, who is in second grade, plays for the U9 and U11 teams; fourth-grader Bonheur plays for the U11, and Rilain, a sixth-grader, for the U13.

In case they do not make it as professional basketball players, they might become electricians like their father. Bonheur would also like to be a policeman if his father lets him. But he might not let him, because the policemen in the Congo are not nice.

With this You agree to accept cookies of other pages, from which content is shown on this page (You Tube, ...)